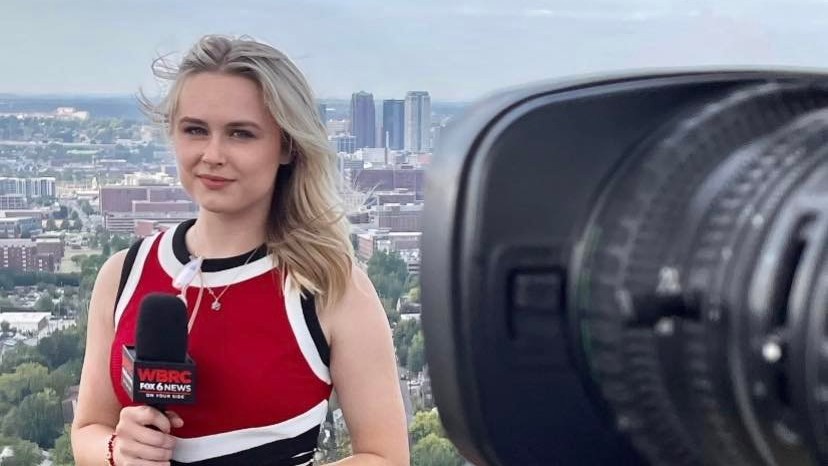 Olivianna Calmes is a future shaper.

“I love meeting new people and telling their stories,” said Olivianna Calmes, when asked what she loves most about her job at WBRC News in Birmingham, Alabama. Calmes, a 2020 Oklahoma Baptist University journalism and mass communication graduate, is a multi-media journalist at WBRC with a special interest in breaking news. Before moving to this position in a larger TV market, Calmes worked as a reporter and anchor at WAND News in Central Illinois.

Originally from Ann Arbor, Michigan, Calmes spent most of her formative years in Taiwan where her parents serve as missionaries affiliated with the International Mission Board. She and her four siblings attended an international school there.

Calmes was familiar with OBU because her grandparents are residents of Shawnee and her grandfather was pastor of First Baptist Church for many years. When deciding colleges, Calmes narrowed her selection to OBU and the University of Michigan.

“I visited OBU after my junior year of high school and had a fantastic experience because of the warm welcome of my tour guide. I felt right at home and loved the campus feel,” she explained.

At the start of her freshman year, Calmes was immediately connected with the OBU international office because she had attended an international high school. It served as a perfect catalyst to make friends, get involved, and celebrate rich diversity of culture and experiences with students from other backgrounds.

“As soon as I arrived on campus, I jumped in and wanted to experience all things OBU. I loved learning our school chant, Ka Rip!, taking in all the fun of Welcome Week, staying up late in the Geiger Center, and making new friends. I knew OBU was going to be a place for me to build close relationships with both classmates and professors,” she explained.

Entering the World of News

Calmes said that because of her experiences overseas and her engagement with people from other countries, the study of international business was of particular interest to her. As an added activity, Calmes joined OBU TV News (now News on the Hill) and was heavily involved all four years, gaining experience in nearly every role of broadcasting including that of reporter, anchor and producer. It was through these experiences that Calmes changed her path to pursue journalism and mass communications as a major, and marketing as her minor.

“I had many opportunities to thrive in my major. I was given the chance to excel, grow and gain such rewarding new experiences through the encouragement of my professors. I felt very supported which gave me the confidence I needed to succeed,” she said. “My favorite classes were news writing, international marketing, and my documentary film class.”

Calmes participated in a variety of media conferences around the state, and attended an OBU media trip to New York City. During that trip, she was picked from a raffle to visit the NYC Fox studios. It was from that experience that the door to intern at Fox News in Los Angeles opened for the following summer.

“My internship in Los Angeles exposed me to the world of network news. It stretched my worldview even more, working and attending church there with brand new friends in a part of the country where I had never traveled. It really broadened my understanding of journalism as I continued on this journey,” she said.

During Calmes’ senior year at OBU, she interned at KOCO-TV in Oklahoma City and gained practical experience in local news, shadowing the station’s crime reporter.

In addition to all the ways Calmes was enriched off campus, she credits her active involvement on campus as a further reason she cherished her time at OBU. Calmes served as a herdie tour guide for three years in the office of admissions, was a student worker in Sarkeys Telecommunications Center, was elected as student government senator, followed by OBU student body vice-president her senior year.

“My time in student government was very rewarding. I was able to interact with the campus as a whole and gain a deeper understanding of students and student clubs,” she said.

Calmes said being a member of the OBU gospel choir and the International Student Association were also fun and engaging extra-curricular activities. Using her gifts of communication and speaking, Calmes had the opportunity to emcee and perform in campus events including the annual Campus Activity Board’s spring show and other student-led activities. A particular honor of Calmes was being nominated for “Best All-Around Female” for Harvest Court.

“OBU definitely impacted and changed me in a positive way. I was surrounded by wonderful students and professors who challenged me in my faith. I was part of a group of six female students who called ourselves ‘strength in numbers’. Our group, started as a way to provide accountability and evolved into providing deep friendships I will have for years,” she said.

Stories that Shape the World

Currently Calmes’ intense schedule as a journalist and exposure to a variety of news stories continues to intrigue her and sharpen her professional profile. As a news reporter, when stories may be a bit heavy or tragic in nature, Calmes remembers that she is a storyteller who seeks to love people well and give them a voice. She merits her time at OBU for preparing her to shape the future in the world of journalism, by relying on her strong foundation of faith and the experiences gained on Bison Hill.