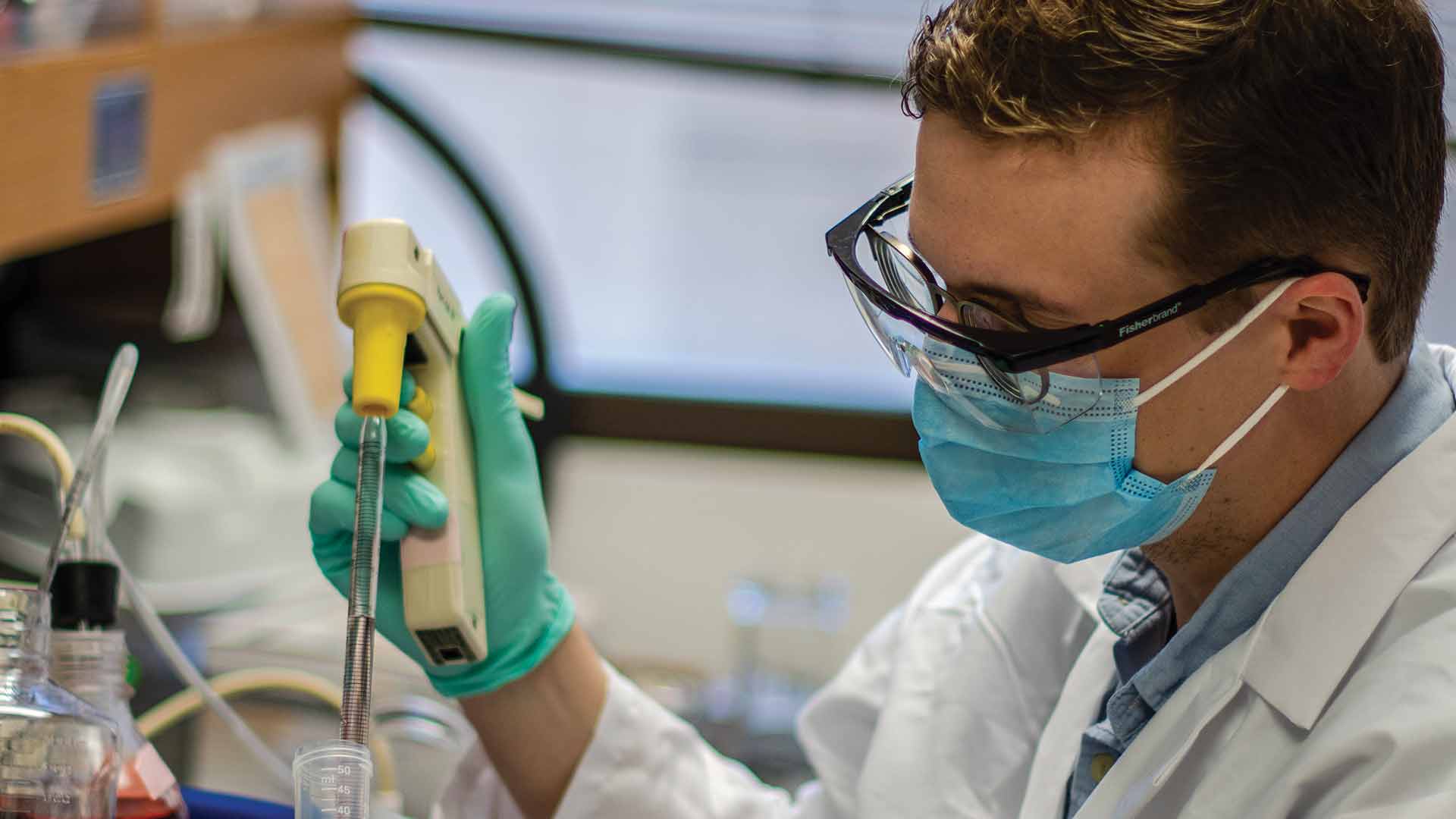 Lucas Adams is a future shaper.

The journey of one alumnus from OBU, to an elite graduate program, to the front lines of research on the hunt for a COVID–19 vaccine.

“Transformation” is a powerful word, especially in higher education. But every now and then, someone comes along and reminds us that in truth, it’s much more than a word.

When Lucas Adams came to Oklahoma Baptist University in 2012, he wouldn’t have told anyone at the time that he was looking to be transformed. His credentials coming out of high school were impeccable, highlighted by recognition as a National Merit Finalist, an honor bestowed on just one percent of high school students nationwide.

Still, Adams simply wanted a college experience that would effectively prepare him for his next step in life, in a place where faith would permeate all aspects of teaching and learning.

“I had narrowed it down to a small handful of colleges, but none of them felt like home until I visited OBU,” he said. “There was just a closeness among the people that’s hard to describe, everyone seemed happy. I could tell it was a place where students were valued, and valued uniquely.”

An Atmosphere of Ambition

Among the many things that, to this day, stand out in his memory about his time at OBU is the level of ambition, achievement and togetherness among students and faculty. It was this sense of community and support that set Adams on his path toward a future in medicine and medical research.

A faculty mentor helped connect him with an internship at the Oklahoma Medical Research Foundation, an opportunity typically uncommon for students at the undergraduate level.

“That’s just one example of how invested OBU’s faculty are in their students,” he said. “Everything about the experience is designed for the good of the student. There are no barriers. My professor knew that I wanted to do research for my career and really fought for me to get that position in Oklahoma City. That kind of opportunity can only happen at a place where they want to know you.”

Adams’ exceptional academic work within OBU’s distinctively Christian setting, along with the experience he gained at the Oklahoma Medical Research Foundation, were key ingredients to the next step on his path toward a future in research – the National Institutes of Health (NIH).

For the next two years, Adams lived, learned and worked in Washington D.C. conducting HIV research at the NIH. And it was there that he deepened his appreciation for two truths that would continue to guide his personal walk with God and his career in medicine.

One of those is the powerful, real-life impact that he knows his research can have on individuals, families and communities everywhere. The other is the undeniable connection he sees between science and faith.

“In Scripture, Paul says that when you look at the heavens and see the stars dazzling and this expanse of space above you, that you are without excuse,” he said. “That you ought to be in awe and in reverence of what you see, recognizing the order that God has instilled within creation.”

And it was exactly that sense of awe that drew him into science from the very beginning.

The Science of God

In a world where too many believe that science runs counter to faith, Adams sees just the opposite. He sees a biological and physical world that’s been put together in an amazingly ordered fashion. He sees creativity and beauty. And he sees the nature of God’s imprint as a powerful force for positive change.

“For me, that’s always been one of my strongest personal convictions about the nature of God,” he said. “That He’s imprinted his own creativity and order on what He’s created. And there certainly is creativity, because when you study biology and you study viruses for instance, you find a lot of bizarre things. You find a lot of things that seem so very counterintuitive, but I just walk away from the lab every day grateful that I get to study creation and I get to understand the creative nature of God.”

This is the outlook he brought with him upon graduation from OBU and at the completion of his internship at the NIH. And he brought it to one of the most respected graduate institutions in the world – Washington University in St. Louis.

Adams was accepted into a dual M.D./Ph.D. program and was able to join the virology labs of renowned infectious disease experts Daved Fremont and Michael Diamond. They are studying potential weaknesses in SARS-CoV-2 that could lead to improved vaccines or targeted treatments to combat emerging variants of concern. One vaccine, a nasal spray, completed clinical trials and has received its first approval for widespread use in India.

Fighting for Our Future

Working on the front line of vaccine research in an effort to combat a global pandemic means many different things to Adams. He describes it as humbling, exhausting, inspiring and a little bizarre. Scientists aren’t typically looking for a stage or a spotlight. Nevertheless, the spotlight has found him.

“It’s bizarre to be working on something that my family and friends ask me about, all the time. People in science aren’t really used to that,” he said. “But it’s also humbling. There’s a sense of urgency. Everyone in the lab has been working long hours, for months now. Everyone’s exhausted, but no one’s giving in.”

The promise of the current vaccines, he says, is exciting. The research he’s currently involved in could lead to second generation COVID-19 vaccines that might bring new advantages in areas such as effectiveness and ease of distribution, among others.

But amidst the uncertainty, it’s the transformation Adams experienced at OBU that continues to guide his work, with the power to transform the future for all of us.

“It’s important to me that the way I conduct science brings glory to God,” he said. “I treat the people around me with respect. To approach my work with humility, to approach my work recognizing that I will never know everything there is to know, but I can hope to understand some of the ways which God has designed the world around us and hopefully use that to help people.”