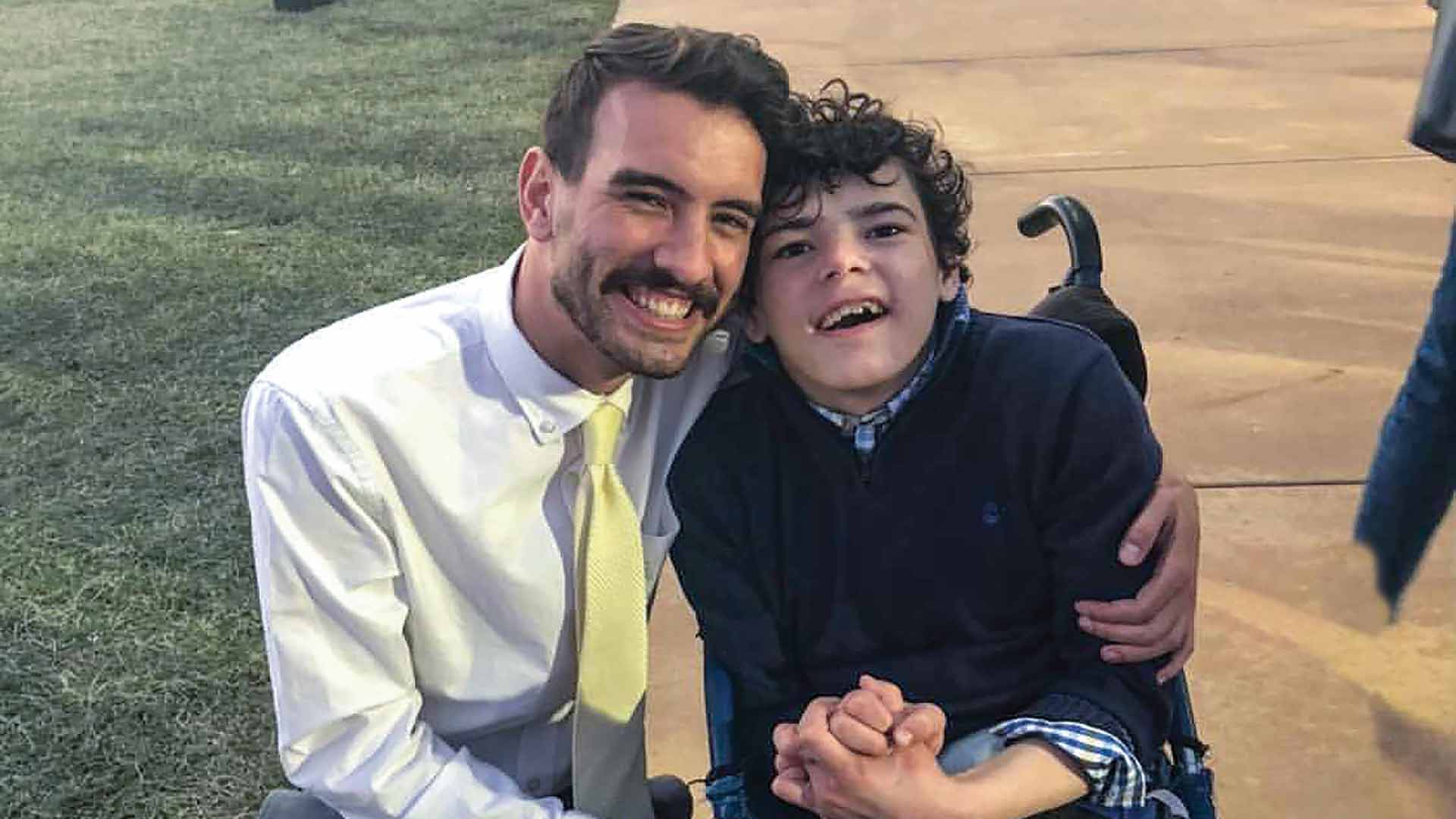 Gavin Yoesting is a future shaper.

Inspiration comes in a lot of shapes and sizes. For Gavin Yoesting, it came early in life in the form of his younger brother Jace.

And it’s something that continues to drive him even as he nears the end of his undergraduate years at OBU.

Coming out of high school, Yoesting wanted to find the right college with a good biochemistry program and strong preparation for a future that involved helping young people, perhaps as a pediatrician. Little did he know at the time how his path would evolve and come full circle with his brother and lifelong source of inspiration, Jace.

While finding the right biochemistry program was a top priority for Yoesting, it wasn’t the only one. He knew that there would be many college options that offered good programs in the sciences.

Equally important to him was something that wouldn’t be as easy to quantify.

“I guess the simplest way to put it, I just wanted a really heartfelt experience,” Yoesting says. “I wanted a place where I knew the people would be genuine and where my faith would be embraced and immersed in the learning experience.”

Having spent much of his childhood at his grandmother’s home in Shawnee, he grew up seeing the many ways OBU was committed to the local community and vice versa. He remembers seeing OBU students mowing his grandmother’s yard for her. And he recalls how invested community members were in the university and in the students.

Upon visiting OBU, he became even more drawn to the place and its people. He’d found his college home.

One thing that set Yoesting apart from many of his fellow students was the fact that he commuted to campus. Instead of living on campus, he made the 20-minute drive from his home in a nearby town.

At first, he said, it made the transition to college awkward. But that feeling didn’t last long, something he credits to the caring, genuine and welcoming OBU community. “This is a place where faculty and staff invest completely in their students. It didn’t take me long to see that firsthand.”

It was that investment – OBU in its students, and students in the OBU culture – that opened new doors of opportunity for him. During high school, he was involved in “everything under the sun” in terms of extracurricular clubs and activities.

He brought that same passion to OBU and wasn’t going to let the fact that he was a commuter student stand in his way.

But Yoesting wasn’t trying to make history. He simply wanted to make a difference.

“My friends and I were always asking ourselves what we could do to make OBU even better, how we could invest more of ourselves into the school,” he said. “I felt that serving in this kind of a role would be a great way to have a direct impact on the student experience. That’s the kind of difference you can make at a smaller school like OBU.”

And it wasn’t just about making OBU better. Yoesting was still committed to a future making other peoples’ lives better. And while this is why he decided to major in biochemistry and prepare for a future in medicine, that would soon change.

The summer before his senior year, he was working for the state of Oklahoma at the J.D. McCarty Center in Norman, a facility dedicated to enriching the lives of children with disabilities. It was here that his life changed.

“I fell in love with those kids,” he said. “I worked with kids who had a wide variety of developmental disabilities, from autism and Down syndrome to physical disabilities.”

One child in particular stood out to him during his time working at the McCarty Center. He was in a wheelchair and couldn’t walk or use his arms. But he was a phenomenal artist, using his mouth to draw. And he was a large part of Yoesting’s decision to change his major to psychology/pre-counseling.

“It was a God-sent experience,” he said. “It made me realize that what I really wanted to do is work with kids living with disabilities.”

“But he can smile”

The reason Yoesting was so moved by his experience with the kids at the McCarty Center is that their challenges in life touched home, literally.

His brother Jace lives with a developmental disability so rare that his is the only confirmed case in the world. Jace is confined to a wheelchair. He can’t walk or talk. Yoesting has been at Jace’s side for most of his life helping to provide him with care.

As a psychology/pre-counseling major, Yoesting now plans to earn a master’s degree in marriage and family therapy with a long-term goal of helping developmentally disabled children and teens, as well as their families, work through the challenges they face.

“I have to give thanks to my journey at OBU for opening my eyes to what I really want to do in life,” he said. “I’ve always been around young people who have special needs, and I just have a love for them, because of my brother. Jace can’t walk and he can’t talk, but he can smile. And that’s really inspiring.”