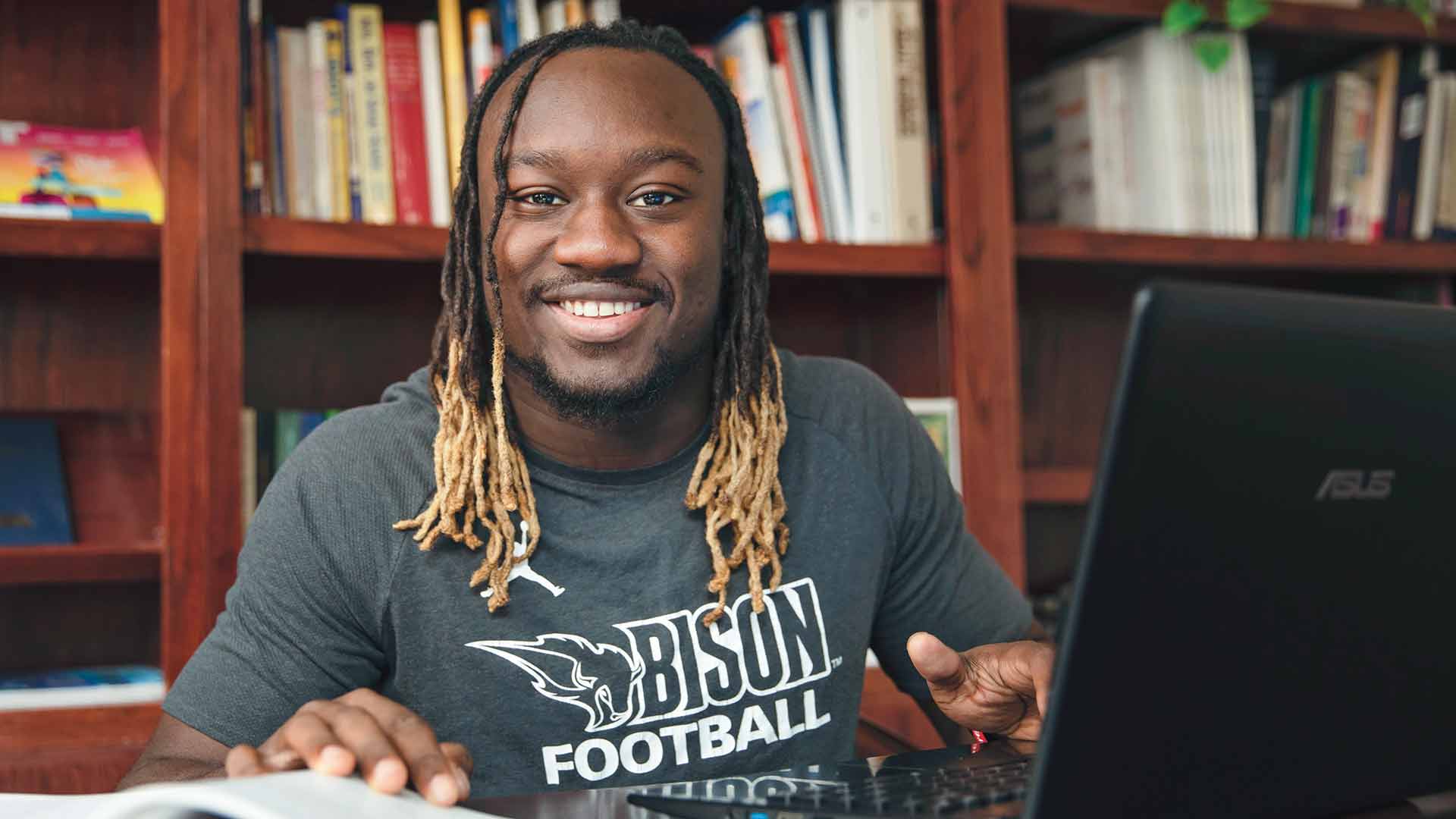 Chris Mehn is a future shaper.

Whether on the football field or in the computer lab, OBU senior Chris Mehn lives out his faith through serving others.

At first glance, computer science and football don’t seem to have a lot in common. In fact, many would think the two are about as far apart as one could get on the spectrum of academic and athletic endeavors.

But if you look at it through the eyes of OBU senior Chris Mehn, football and computer science aren’t as diametrically opposed as it might appear. The way he sees it, they both share the same common, Christian spirit that he himself strives to personify every day – that of helping others.

A native of the Houston, Texas, area, Mehn knew that football would be a major part of his collegiate path. For him, it was just about finding the right school and a football program with potential waiting to be realized.

That’s what he found at OBU.

“I did have other offers, but there was just something about OBU that stood out for me,” he said. “I felt the program had the most potential, and on top of that it was a place where I could deepen my faith.”

And it was when he first arrived that he experienced firsthand the sense of family, faith and focus on helping others within the community and culture. As a freshman Bison football player, he was paired with an upperclassman player who served as a peer mentor.

As far as Mehn was concerned, Mallory was the “it” guy. He helped guide Mehn in his first few years – in the weight room, in the classroom, in his walk with Christ. And Mehn knew that, one day, he wanted to be the kind of mentor to someone else that Mallory was to him.

A Different Kind of Win

Early in his OBU experience, Mehn also discovered that winning wasn’t limited to the football field. As any computer science major can attest, few academic areas of study are more rigorous or challenging. For him, it was about embracing that challenge.

When he was in the eighth grade, Mehn took part in a program that evaluated students’ academic strengths and weaknesses and helped determine areas of study for which they might be best suited. He had always been drawn to computers, and his middle school evaluation confirmed that it was a good fit.

The challenge was on.

“It’s definitely a lot of work,” he said. “I’ve always liked working with computers. It can be difficult but the challenge is intriguing to me. I love being able to do coding and create something from scratch that in the end has the ability to solve a problem. Every time I complete a code, I consider that a big win.”

An Exercise in Selflessness

Mehn’s experience as a football player and a computer science major represent a compelling intersection of faith, selflessness and the spirit of helping others.

As a running back on the Bison football team, he cherishes the way players go out into the Shawnee community to provide help and youth mentoring. One of the programs they offer, Bison Buddies, pairs players with elementary school students.

“I really feel blessed to be able to take part in that,” he said. “It’s all about bringing people together and helping each other.”

As a student in the computer science program, he appreciates the education and preparation he’s gaining that enables him to help others resolve technical issues and problems they encounter with their computers.

“It feels good to be able to help people work through problems they’re having. I like being that guy,” he said.

In fact, Mehn has always had selflessness in his heart. In his hometown of Houston, he grew up spending time volunteering at local rescue centers and food banks. For him, it’s simply part of being a Christian.

“My goal in life is to serve,” he said. “That’s what being a Christian is all about, reaching out and helping others in any way you can.”

Winning at the Game of Life

As he envisions life after OBU, Mehn knows that the spirit of selflessness will always be a part of whatever it is he’s doing. It might be professional football, an endeavor he’s definitely interested in pursuing. It might be raising a family and a career in computer science, putting his programming and coding skills to work. He even hopes to one day launch a youth academy offering programs in football and soccer, another sport he grew up playing.

“I believe God gave everyone special gifts for a reason,” he said. “I’ve learned so much in my time at OBU about what it means to be a Christian, it’s been nothing short of amazing. Moving ahead, I just want to be the best I can possibly be, no matter what I’m doing. I want to help younger guys on the football team in the same way Isaiah helped me. I want to continue giving back to our community. And I want to use my knowledge and skills in computer science to be a resource for others.”